This is an invitation event open to the Top Dog in each breed – but limited to 64 dogs, where the judges are secret until the night – and the evening takes the form of a lovely dinner and Dance – hence the frock!   Since 2011 Matka has been the Top Dog and attended the Contest of Champions – and has a pretty good record, this year – he again made it through to the second round – winning his first round tie under Malgorzata Supronowicz from Poland

Thanks to Sally McKinlay for the photos 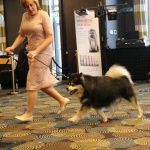 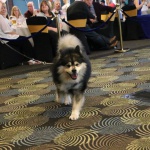 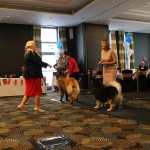 Canine Degenerative Myelopathy (DM)  is a spinal cord disorder which affects older dogs with age on onset varying – but in the breeds studied it appears to have onset varying from 8 to 14 years of age.  The symptoms are usually a gradual degeneration of the spinal reflexes and muscle weakness causing loss of coordination in the hind legs. Sadly the symptoms worsen over time until the dog is unable to support itself, and these symptoms can appear worse in larger heavier breeds.  There are a number of breeds eg GSD, Cardigan corgis, Rhodesian Ridgebacks to name a few where there is a strong correlation between the presence of the SOD1 mutation and symptoms of the condition, however the test can be carried out on any breed – though it is IMPORTANT to stress that there is insufficient evidence to show a direct correlation for Finnish Lapphunds and the condition.   The situation is complicated as there are many other spinal cord illness and of course injuries which can produce similar symptoms, and the only true way to prove the condition is actually present is from histology post mortem.

A number of Overseas Breeders have started testing their dogs – in case the condition exists in our breed – the Breeding Committee of the Finnish Lapphund Cub of Finland have noted : “there are four dogs that have been tested homozygous for the DM mutation and two of them (aged 9 and 11) are exhibiting clinical signs and have been diagnosed DM-affected by a vet (the other two are still young). Furthermore, a couple of other dogs have a DM diagnosis but they died long before the gene test became available. Unfortunately it will take years before we have a better picture of how many of the homozygous dogs actually develop symptoms and whether the diagnosis can be pathologically confirmed.”

With this in mind and not wishing to give any puppy owners the heartache that maybe on the horizon from any DM affected dogs – I have chosen to test Matkamies and Shacal Reilu Peli – both are shown to be Clear/Normal for the gene.  Therefore the litter of six from Matka x Tullu must be genetically clear, and at worst Matka’s pups from other litters can only be carriers – they maybe clear.  In addition Tilkkuturkin Bunahilkka has also been tested clear meaning her daughter (by Matka) – Tilkkuturkin Hallantuoma To Elbereth must also be genetically clear.