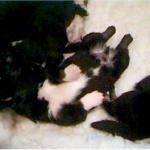 Echo made history by being the first bitch in Uk (any breed) to be mated under the Pet Passport Scheme (details below), having journeyed to Finland on 26th February, where she was mated to Fin Ch Lumiturpa Nörri. (Nörri can be seen on the Lappalaiskoira gallery, with some of his offspring including his daughters, Pihla and Pigga). Echo then returned to the UK under the Pet Passport scheme, having to fly first to Belgium, then come home in our car via France, on the P & O Ferry.
Nörri is a very handsome strongly built dog, with excellent coat and bone. I could not span his front legs with my middle finger and thumb! He has a lovely temperament, friendly yet calm, and he has passed his attributes on to his progeny. This is the first time that a UK bred bitch (any breed) has returned to Finland for mating, and the resulting puppies bring in new blood lines for the UK.

Adventures of A Finnish Lapphund

When you are privileged to own a rare and developing breed, the choice of sire for your breeding programmes is extremely important, since one needs to consider not only your own ‘selfish’ motives, but the breed’s progress and development as a whole, and the effects on gene pool etc. So when I decided to have a final litter from my Finnish Lapphund bitch, Sulyka Mischa at Elbereth, the choice of sire was something I researched for over 1 year.
I felt I should consider breed type, conformation, and look to proven lines, which were relatively low risk for inherited defects. Since my bitch had already had two litters from prepotent lines in the UK, I felt that my best option was to select a sire from the country of origin. With Echo’s season being estimated to be in Feb 2000, I started the necessary process to apply to import semen from Finland to enable my bitch to be artificially inseminated.
The relevant paperwork was duly submitted to the Kennel Club in November, import permits were sought from our Ministry of Agriculture, and the veterinary surgeons in the UK and Finland were put on ‘standby’ for the practicalities. All I could do was wait with fingers crossed, and hope that Echo did not come into season early.

When at the end of December the MAFF announced that the Pet Passports Pilot Scheme (PETS) was to be brought forward to February 28th 2000 (originally set for April – too late for Echo!), I realised that there was now an alternative to Artificial insemination. All I had to do (it sounded easy) was get the relevant chipping/rabies and paperwork arranged, before Echo’s imminent season.

My own vets were not comfortable to be pioneers in this scheme, so I took Echo to the Mandeville Veterinary Hospital (where some years previously I had worked with Trevor Turner), Mandeville were very helpful, and understanding of my timescales, and the process was duly started. Echo was microchipped and rabies vaccinated on 30th December 99. The manufacturers of the Rabies Vaccine do recommend that a course of two vaccinations be given 14 days apart, (I understand only 80% of dogs will have sufficient antibody blood titre to pass the blood test on one vaccination). But with Echo’s season being imminent, I felt that the luxury of time was not on my side, so we opted for a single vaccination, and blood testing 30 days later.
When the PETS scheme was announced, it was believed that a limited number of airlines would be taking part, so I assumed that BA would be involved, so getting Echo to and from Finland would be simple! My assumptions were to be proven wrong, and then the phone calls started trying to work out how best to transport Echo around Europe. After a lot of deliberation, it was decided to fly Echo direct to Helsinki, and then to get her mated, then to leave her with my kind friend Nina Lahin (Noblefamilys Border Collies and German Spitz Klein). We would then make later arrangements for Echo to be flown from Helsinki to Brussels, whereupon I would drive from UK to Brussels to collect Echo (making use of the speedy Channel Tunnel service, who were licensed under the scheme).

You can imagine how much of a flap I was in, when Echo chose to start her season on 16/2/00 and we still had not received the blood test results! Due to demand, the lead-time on test results had extended from the original estimate of 2-3 weeks to 3-4 weeks. I was duly relieved when on 23/2/00 Mandeville were able to confirm that Echo had passed the blood test, and could therefore be issued with a pet passport. The passport was duly issued, and the outward flights booked for 26/2/00, with Echo’s mating set for 27/2/00.

Entering Finland with a dog is an easy process, no special paperwork being required for UK dogs, but I had to phone around many embassies to check the requirements for dogs entering Belgium and France, from Finland. As it happens only rabies certification is required, unlike dogs entering France from UK, when an Export Certificate is needed (not sure why there is an anomaly here). Echo’s journey to Finland was uneventful, although I must admit to being very concerned as to how she was coping in the Cargo hold, whilst we were enjoying supper on the flight. At Helsinki we were reunited, and Echo appeared none the worse for the experience.

As it was winter in Finland, there was thick snow on the ground, and the scenery was very picturesque, Echo seemed to enjoy the change of scenery and the snow underfoot. She was duly mated at the well-respected Lumiturpa Kennel, and then joined us on a couple of trips to meet other Lapphund breeders. Then we had to start making plans for her journey home. As well as arranging the practicalities of how we would be able transport Echo back to UK, via the French ports, we also had to consider the preventive treatment required for ticks and tapeworm, and the timing of these treatments.
It is not normal to worm bitches in early pregnancy, and certainly this action was not recommended to me by Veterinary advisers, or the drug manufacturers. But neither did they say that it would be detrimental, just that they would not advise the action, and that dosage should be carefully measured. The treatment for Ticks was not a problem, treatment being perfectly safe in pregnancy. Timing was very important, the regulations requiring that treatment be administered at least 24 hours before embarking for UK, and not more that 48 hours.

I duly returned to England (without Echo), and arranged my journey across the Channel via the tunnel, whilst Nina, co-ordinated times at her end, to arrange for Echo to be treated at her local vets, and then to be sent as cargo from Helsinki to Brussels airport. On Saturday 4th March, I traveled across to France and drove up to Belgium, to meet up with Echo. Again there were no difficulties at the Belgium end with her paperwork, and she was happy to see me and jumped up into the car, and settled down happily for the journey home. 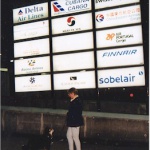 Collecting Echo at Brussels Airport after her ‘adventure’

At Calais, when booking in for the journey home, we duly declared Echo, and the relevant paperwork and microchips checks were carried out by the carriers. Echo was passed OK to travel and we boarded the Ferry for the homeward journey. After the human passport check at Dover, representatives of the MAFF stopped us, and again our papers were checked and Echo’s microchip read, there were no problems and we were wished on our way.

Echo has now rejoined her family, and was happy to go out for a familiar walk with her Border Collie Friends, now we just have to wait and see if the adventure will be productive. At times the problems and difficulties seemed to be working against me, but in the end the journey itself was quite straightforward, but I must admit to being extremely nervous when the microchip was read, previous scares in the press had unsettled me. I am not sure whether I will be taking Echo back to Finland at a later date, but maybe when the airlines join the scheme it is something I can consider.

The organisation of such an adventure could only have been possible with a great deal of help and support from Nina Lahin, as well as her kind hospitality for both her human visitors and the canine lodger! Other friends and fellow show people from around the world have contributed with advice, loan of flight crate and offers of help, its when you are trying to achieve the impossible that you find out what a lovely bunch of friends you have across the doggy world. 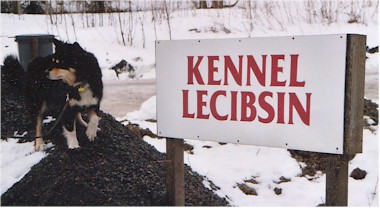 The story has an amazing happy ending

On 26th April 2000 – Echo gave birth to eight super tricolour puppies, who have had an amazing impact on the breeding of the Finnish Lapphund here in UK