Lovely successes to report from the Breed Club Shows: first at the FLC of GB show, judge Rachel Bradley awarded BPIS (at only her second show) to Elbereth Lumenlumo – owned by Fiona MacVicar-Collingwood, she won both puppy and junior bitch classes.

At the same show Elbereth Tuulenpoika picked up his last point required for his Junior Warrant under the tough new scheme.

Then onto the SFLS open show, judged by Caron Bell, who awarded Res BIS and BOS to Ch Elbereth Pelinainen JW

and Elbereth won the Breeders class with Matkamies, Pelinainen and Kiasma.

Not forgetting Halla’s return to the show ring after over a year!  Her first outing back in the ring after her pups, Ch Tilkkuturkin Hallantuoma to Elbereth JW ShCM returned with a bang, taking her 5th CC and Best Opposite Sex at Driffield Championship Show under Rodney Oldham. 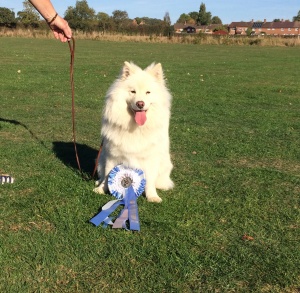